Armenians made in Georgia

The first small Armenian community in Georgia dates back to the end of the 6th century and the beginning of the 7th century. The migration of Armenian population to the Georgian lands begun in the Middle Ages though, during the Muslim rule of Armenia. Back then, Armenians formed already the single largest group of the Tbilisi‘s population in the 19th century. In that period, due to the contribution of intellectual and business men, the Georgian capital flourished both culturally and economically, Not surprisingly, the city became the center of cultural life of Armenians in the Russian Empire from early 19th century to early 20th century. The persecution in the Ottoman Empire and Persia - ended up into the Armenian genocide - caused a jump in the Armenian population until it reached about 40% of the city total. As of today, Armenians are still the largest ethnic minority in Tbilisi and have left an incredibly rich cultural and architectural imprint, especially in Tbilisi itself: much of the old city was in fact built by Armenians.

The vast majority of Armenians in Tbilisi settled in Avlabari, the neighborhood on the east side of the Mtkvari River, directly across from Old Town and Meidan Square. The area has traditionally been home to Tbilisi’s sizable Armenian population: here they erected their own churches and run their business, turning Tbilisi into a metropolis of Caucasus. Despite the acknowledgement of the Armenian legacy remains mostly in the memory of the old generation Armenians, lot is done to not let this being forgotten. This project aimed to document what remains of that culture and how different the situation is for the Armenians living outside the capital.

The Ejmiatsin church in Avlabari, part of the Diocese of Armenian Apostolic Orthodox Church and once national and political center of the stateless Armenian people, is the religious center of the Armenians living in Tbilisi. On top of that, church’s reverends visit regularly the villages in the Kvemo-Kartli region to celebrate mass and support the Armenian communities. The music school in Avlabari, on top of classical and Georgian music, proudly teaches Armenian composers music to the young students attending classes. Painters, puppeteers, shoemakers: all work to keep both memory, art and traditions still alive. Even though ethnic Armenians born in Tbilisi are fully integrated in social life and part of the local culture, the Armenian community keeps doing much to preserve its identity.

In Samtskhe-Javakheti, the southern region bordering on Armenia, one of the country’s poorest, where rural Armenian communities are compactly settled reaching up to 90% of the population in some villages, immigrants’ conditions are different. Once Samtskhe-Javakheti's dominant ethnic group, Georgians now represent a minority there. In fact, the majority of the population does not know Georgian language: many studied in Soviet times, when Georgian language wasn’t taught at all, and when Russian was spoken. This represents an issue for Georgian government, lacking Georgian language speaking personnel to fulfill governmental roles, and for local community, already characterized by extreme poverty and decline in rural production. In need of opportunities, many travel to Russia every year to work as manual laborers.

Therefore, for a number of different reasons, including its geographical location, the Armenian minority has somewhat been left behind in the state-building process, remaining very poorly connected to the rest of Georgia. 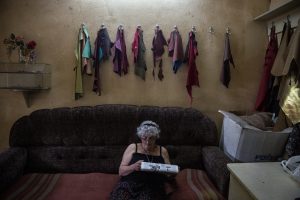 An Armenian woman reading the news in a shoe and bag repair shop in Tbilisi. 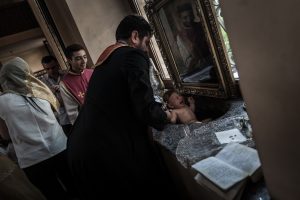 Reverend Father Virap baptizes a boy in the Ejmiatsin Church, the Armenian Church in Avlabari, Tbilisi. 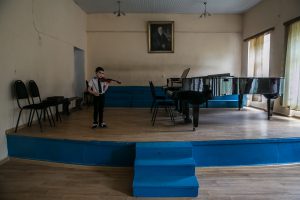 Alex, 8 years old, posing with his violin before his lesson. To keep culture and tradition alive, the music school in the Armenian district of Tbilisi (Avlabari) teach Georgian-born kids Armenian composers’ music such as Aram Khachaturyan. 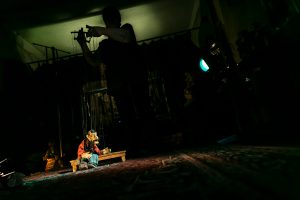 Zhanna, the wife of Gary Davtyan, a famous puppet master, performs a show with her husband’s handcrafted puppets. After his death, she keeps the memory alive by entertaining visitors in their house museum. 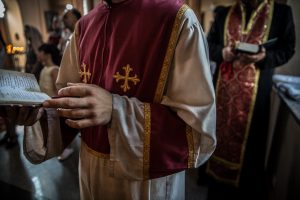 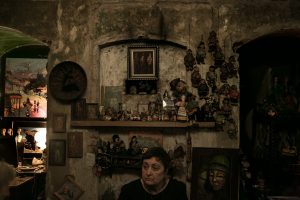 Gary Davtyan’s wife, Zhanna, surrounded by dozens of her husband’s unique handcrafted puppets. Gary began settiing up his theatre in 1992 and continued creating until his death in 2002. 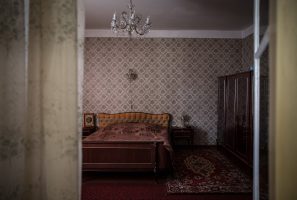 A bedroom in Avlabari district, Tbilisi. Despite being born and growing in Tbilisi, many couples still furnish and decorate their houses with Armenian-style furniture and taste. 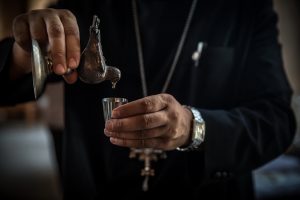 A priest in Ejmiatsin Armenian Church during a baptism ceremony. 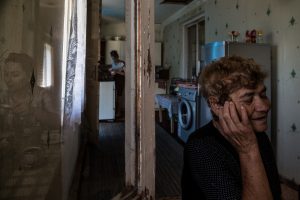 An Armenian woman and her daughter preparing coffee for their guests in Damia, around two hours from Tbilisi. Outside of the capital, most women stay home taking care of family and relatives. 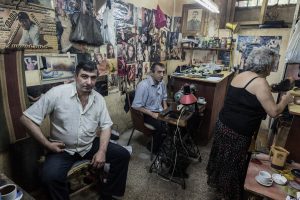 Georgian-born Armenian shomakers in their shop in Dzveli Tbilisi, the old part of the city. On the wall, next to semi nude girl pictures, a portrait of Stalin, whose father was a local shoemaker too, 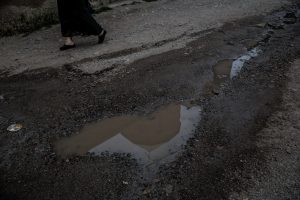 A woman going to the main worship service in the Armenian Church of Shaumian, celebrated by the Tbilisi members of the Diocese of Armenian Apostolic Orthodox Church. 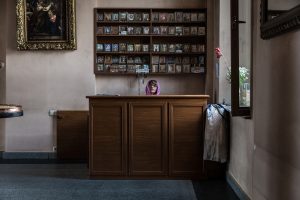 One of the women volunteers in Ejmiatsin Church in Avlabari. 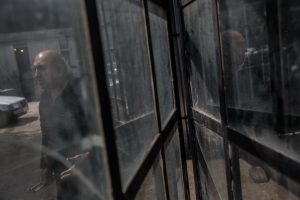 An Armenian mechanic, named “Cele” after his similarity to the Italian singer Adriano Celentano, in his garage in Tbilisi. 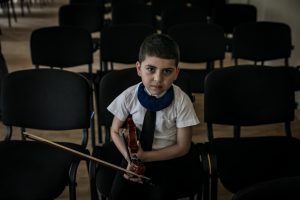 Alex, a 8 years old Georgian-born Armenian student and his violin at Avlabari music school in Tbilisi. 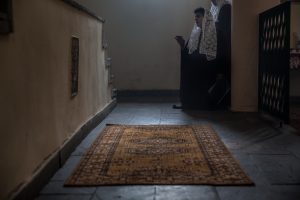 Singing during an Armenian liturgy. Two women singers during the mass in a Shaumian. The women, together with the Reverend Father from the Ejmiatsin Church, travel to the villages outside Tbilisi to celebrate liturgies and meet the local communities. 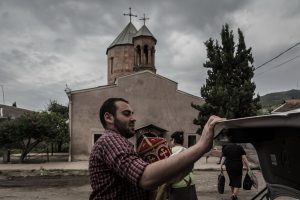 Boris, 28 years old, one of the volunteer of the Ejmiatsin Church of Tbilisi. Together with the reverends of the Armenian Apostolic Orthodox Church, he prepares the liturgy for the Armenian communities in Kvemo-Kartli region. 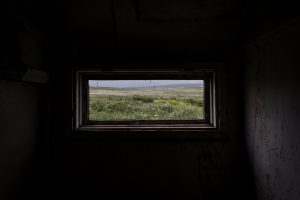 A piece of landscape from an abandoned rest area in the Samtskhe-Javakheti region. 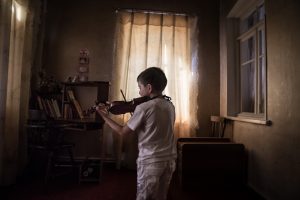 Alex, ethnic Armenian born in Tbilisi, practicing with his violin in his room in Avlabari. 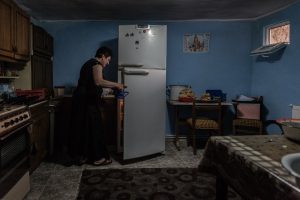 A woman preparing lunch. On the table, hme-made Lavash, the most popular bread, an inseparable part of the Armenian cuisine, used to accompany any type of food. 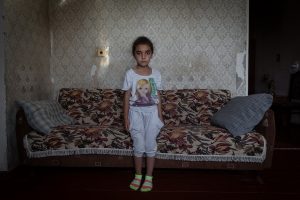 A girl posing in front of family’s sofa.It is not rare for kids living in the areas far from Tbilisi to grow up speaking mostly Armenian language with their relatives. This will have an impact on their education and access to jobs and studies. 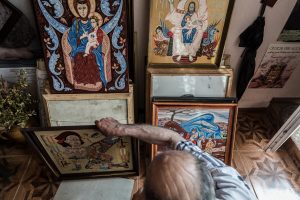 A painter showing his pieces in his atelier, inspired by the Armenian genocide. Even if more than 100 years have passed after those events, the feeling is still quite strong among Georgian people of Armenian descent. The religious works of this painter depicts the sorrow and bleeding inspired by those tragic events. 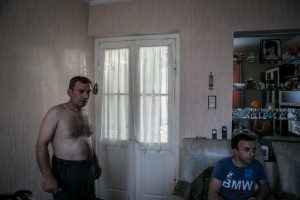 home of an Armenian house in Avlbari, the Armenian district of Tbilisi, 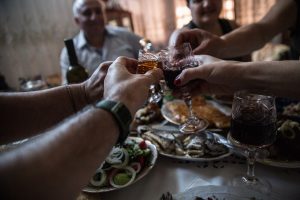 Armenian recipes are passed on from generation to generation and the signature of specialties become a treasured family secret. Meals accompanied with intimate toasts and drinks, such as the legendary Armenian brandy. 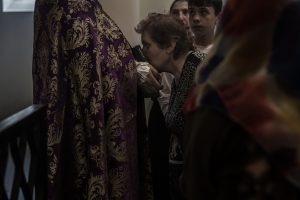 An old woman kissing the bible during the liturgy. One after the other, the churchgoers queue to pay tribute to the Holy scriptures. 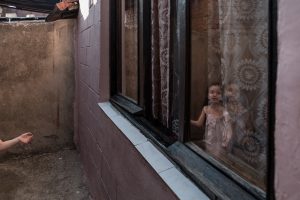 Ana, 5 years old, playing in the yard of her house in Avlbari, Tbilisi. 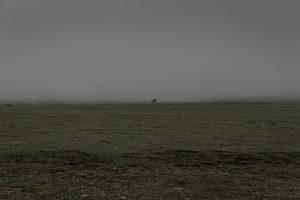 A shepherd riding a horse to catch a missing sheep at the peak of Tikmatashi Pass. 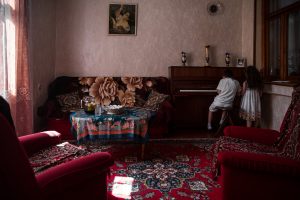 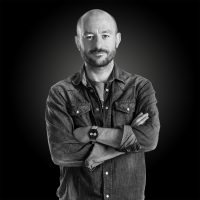